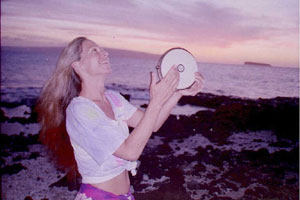 Though Middle Eastern Dance is her first love, Sahar has been involved in and inspired by many dance forms. Sahar and co-collaborator Heidrun Hoffmann choreographed and performed a “Millennium of Movement Dance Collage” for the midnight countdown at First Night Santa Cruz Y2K for an audience of 30,000. At the Motion Pacific third anniversary show in January 2001 Sahar collaborated on a group number with hip-hop master Gary Kendell that culminated in a drum solo stand off between her and Gary.Having studied Brazilian Samba for over ten years, Sahar has performed with Fusao and the musical predecessors of Sambada as a dancer & percussionist. Because of the musical & aesthetic compatibility, Egyptian-Samba fusion is one of Sahar’s favorite themes. She has also performed interpretive “mystical fusion’ solos with Rick Walker and Worlds Collide at the catalyst and other local venues on several occasions.

“Sahar,” which is Arabic for “twilight,” embodies in her dance the magical, mystical qualities of this liminal time when reality changes with the shapes and colors of new dimensions. Her artistry has inspired dancers, musicians, scholars and even sailors! In naming their new sailboat after her, a local couple describes the qualities shared by both the dancer and the vessel that would transport them safely across the seas: “Sahar has a soul. She is strong, long and curvey, able to cast a spell over anyone sensitive to her charms—She is quiet and classy. Those who know, though, walk up and start talking?” Sailing vessel Sahar now resides in a Honolulu harbor, home to a young family of four who have not yet met her human namesake.In order to maintain balance in her life, Sahar remains active outside of the dance and academic world through her part-time work as a registered nurse, as a sports and outdoor enthusiast, and by spending quiet time at home.