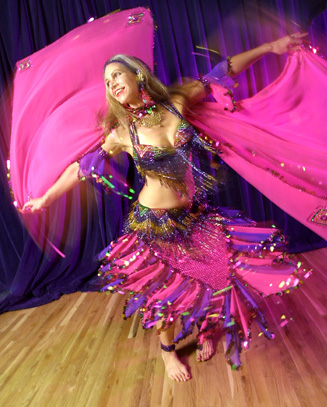 Sahar began studying Belly Dance in the Bay Area during the mid 1970s with Khadija Rabbanne, Najia El Muzayen, Jamilla Salimpour and Bert Balladine. More recent mentors include the late Ibrahim “Bobby” Farrah, Rakia Hassan and Mahmoud Reda, founder of the first Egyptian national folkloric dance troupe. She began her professional dance career as a full time house dancer at popular Bay area restaurants and clubs like the old Casbah in San Francisco. She has performed extensively as a soloist throughout California and has made guest appearances in Reno, Las Vegas, New York, Denver, and Athens, Greece. Sahar resides in Santa Cruz where she teaches group and private classes.

Sahar specializes in a creative synthesis of Egyptian, Arabic and Turkish folkloric, cabaret, classical and Gypsy styles with influences from African, Brazilian, South and Central Asian dance and Yoga. Her knowledge and passion for Middle Eastern music, rhythms and culture bring excitement to her performance and instruction. Her commitment to the discipline and deep love for the art lend to her unique fluidity and technical precision. Internationally recognized as a professional soloist and dance scholar, she continues to seek instruction and inspiration from the world’s top masters, and to research the history, cultures and current trends surrounding this rich and diverse art.

Sahar has a Bachelor’s degree with highest honors in cultural anthropology with an emphasis in world music and dance. Her thesis, “Belly Dance: An Ancient Art in Modern Perspective” also received honors. Supported by a grant from the Santa Cruz Arts Commission in 1993, Sahar produced “A Her-Story of Belly Dance,” honoring the ancient roots of the dance, tracing an evolution of styles in the East and West, and celebrating one hundred years of Belly Dance in the United States.

In 1993 Sahar joined Turquoise International on a dance study tour of Egypt. She extended her stay to take in more of the culture and study privately with well-known choreographer Rakia Hassan. In 1997 she attended the historic International conference on Middle Eastern Dance which included dance workshops with Egyptian superstar Mona Said. She attended the second international conference in May 2001 featuring famous Egyptian dance legends Nagua Fouad, Farida Fahmy and Mahmoud Reda, and academic presentations by dance scholars from around the world.

Sahar sponsors special workshops with visiting artists such as the legendary Bert Balladine and is often a featured seminar instructor in other communities. She has provided a number of educational presentations at the University of California, Santa Cruz and in the local community. She is an active member and supporter of the Santa Cruz Ethnic Arts Network. In 1989 and 1992, Sahar placed as first and second runner up in the national “Miss America of Belly Dance” contest. She has made the cover of “Caravan,” a popular international Middle Eastern dance journal, and recently the cover of the Santa Cruz Metro.