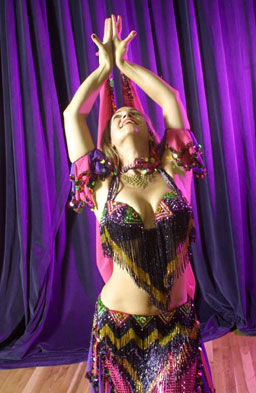 Musical interpretation is a key component to the improvised solo style of Belly Dance, also known as Raks Sharqi. By working with many Arabic musicians, Sahar learned the language of Middle Eastern music and how to translate the tones, rhythms and moods into a physical expression of emotion and movement.Sahar began studying Middle Eastern rhythms with well-known percussionist, Maryellen Donald, who was the accompanist for her early dance classes. Over the years, she has mastered the art of finger cymbals, dabbled in doumbec, and has focused recent years on studying frame drum. She has studied, played and performed with professional drummers: Armando “Uncle Mafufo” Fujaco, Michael Gruber, Rick Walker, Papiba Godinho, and Layne Redmond, and has taken workshops with Omar Faruk Tekbilek, Souhail Caspar, Hossam Ramzy, Glen Velez and many others. She is currently a member of Layne Redmond’s West Coast Mob of Angels. In addition to teaching dance classes, Sahar teaches beginning frame drum classes for women, with a focus on drumming for ritual and healing.

Sahar has made it her life’s work to understand all aspects of this multifaceted art. Clearly there is much more to Belly Dance than the steps. Each body movement expresses a range of spiritual, emotional, and cultural qualities in close relationship with the music. The rhythms and tones of the drums and instrumentals inspire complex moods that are expressed through isolated movements of different parts of the body in culturally specific gestures. A skilled dancer reflects all these qualities in an improvised solo. A thorough understanding of the music and cultures from which this dance originated is essential. Sahar is also interested in what draws Westerners to explore the art of Belly Dance. Constantly facing unrealistic expectations about their body shape and size, many women find Belly Dance an empowering venue for expressing and affirming their sensuality and improving their self-image. Unlike western dance forms such as ballet, there is no ideal shape, size or age. This is a dance that women can easily mature into. Bert Balladine maintains that “women have nothing to dance about until they are over thirty-five.” Sahar also welcomes men in all her classes, as this is traditionally a folkloric dance passed down through the generations from mother to both male and female children—In the Middle East, this folkloric style is purely an expression of emotion and culture, regardless of gender. As a teacher Sahar encourages self-exploration and creative expression, while staying within the realm of traditional movement and musical styles. When using artistic license to combine ethnic dance styles in performance or instruction, she is able to clearly identify the separate ingredients that form the resulting Ethno-fusion. An encouraging and supportive teacher, Sahar believes each class should be a positive experience facilitating deeper awareness and connection between mind, body, spirit and culture.